On Saturday May 18th, my husband and I loaded our bikes on to the back of our car and headed over the hill to Marina for the 3rd Annual Fort Ord Warhorse Day an event we found listed in the Monterey Peninsula Regional Park District’s Let’s Go Outdoors Spring and Summer catalog, and presented by Friends of the Fort Ord Warhorse.  Honestly we didn’t know what to expect, but we were pleasantly surprised to find so much history, “hidden in plain sight,” not to mention plenty of family friendly outdoor activities. 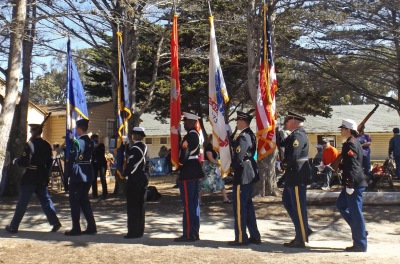 Our day began with the Defense Language Institute
Color Guard’s presentation of the Colors, 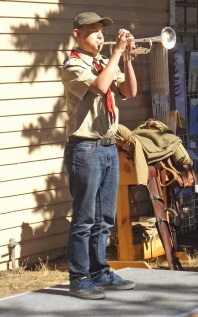 and the National Anthem sung by Sarah Mitchel
with accompaniment
by the Defense Language Institute
Joint Services Brass Ensemble. 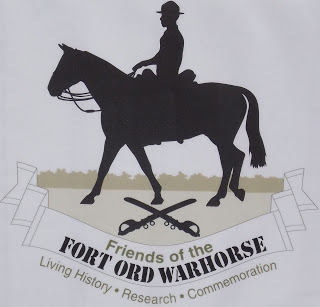 The 18th Cavalry was first organized on June 6, 1917.  On November 11th they became the 76th Field Artillery Regiment assigned to the Third Division and were sent to France in May of 1918.  The 76th saw their first fire fight on July 5th near Chateau-Thierry, on July 15, 1918, they were instrumental in the defeat of the Germans in the Champagne-Marne Defensive and continued to serve well through the Armistice on November 11, 1918, finally returning home, to Camp Pike, Arkansas, the following August.

From Arkansas, the second battalion of the 76th was moved to the Presidio of Monterey in 1922 where they remained until 1940.  During the unit’s first few years at the Presidio they built the horse stables, the last of which remain, are located across from the Presidio Museum.

“On August 4, 1917, the U.S. War Department purchased 15,609.5 acres of land from the David Jacks Corporation to be used as a training area and firing range for the infantry, cavalry, and field artillery units stationed at the Presidio of Monterey.

*
This acquisition, today known as the East Garrison area, was then called Gigling Reservation, named after a German immigrant family that had lived on the land.”(1)
In 1933 the Army renamed Gigling Reservation, Camp Ord, after Maj. Gen. E.O.C Ord a Civil War commander.  Much of these 15,000 plus acres consisted of manzanita scrub brush and sand. In 1938 improvements on the land began with the building of administrative buildings, barracks, mess halls, a sewage treatment plant and tent pads. 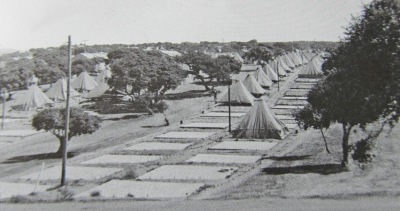 *
On July 1, 1940, the War Department activated the 7th Infantry Division under Brigadier General Joseph Stilwell to a tent city at Camp Ord (later called East Garrison), while they built a more permanent post known as Camp Clayton (the present Dunes shopping center) and Camp Pacific on the coast.  The second battalion of the 76thField Artillery (horse drawn) unit stationed at the Presidio of Monterey became the first unit of this new division. Their 1,400 horses were kept in temporary corrals at the tent encampment, until their stables were completed.
On August 15, 1940 Camp Ord, Clayton, Pacific and other nearby camps combined and were redesignated Fort Ord.  By the end of the year, For Ord had 1,098 buildings finished or in progress.
Historic Ford Ord Station
Horse Veterinary Hospital

*
“Work on a $2,731,000 construction project at Camp Clayton in Fort Ord…is one-third complete…The contractors expected to begin work in a week or two on another $3,500,000 construction project at the fort.  This development will include 146 barracks, 34 company storehouses, 23 company messhalls, 33 company recreation rooms…commanding officers’ quarters, veterinary hospital…” Oakland Tribune Friday October 11, 1940

The first buildings ready for the 76th Field Artillery Unit were twenty-one stables, a blacksmith, and saddler shop.  The soldiers moved their horses from the temporary corrals into their permanent homes along 4th Avenue running south from 8th Street. These structures were torn down in 2011. Next the soldiers moved into their own barracks near 1st Avenue and Divarty Street December 1940, many of which were demolished in June 2009. 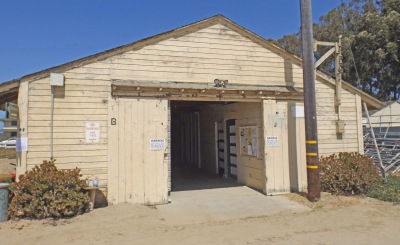 On January 30, 1941 the veterinary hospital (presently the Marina Equestrian Center) was completed. This hospital would care for the horses of the 7th Field Artillery, the 68th Quartermaster Pack Troop (horses and mules), and the 107th Cavalry (horse-mechanized) unit that came to Fort Ord in December of 1941 to defend the West Coast from a Japanese invasion.

The six buildings of this veterinary hospital are the only intact buildings from the Fort Ord warhorse era, and the only Series 700 WWII Mobilization Type Station Veterinary Hospital of its kind left in the United States, these buildings have been “hidden in plain sight” for 70 years.

The Annual Warhorse Day’s give us the opportunity to explore these living-history buildings, and  fascinating “Flash Museum,” set up in the T-3140 C-5 Veterinary Clinic building by the U.S. Army Veterinary Corps Preservation Group.  A permanent museum of this sort at the Marina Equestrian Center, possibly in this building, is one of the goals of the Friends of the Ford Ord Warhorse.

If you missed the annual warhorse event you may take a self-guided tour of the six buildings that comprise the U.S. Army Veterinary Hospital at the current Marina Equestrian sight by using this informative flyer from Friends of the Fort Ord Warhorse. 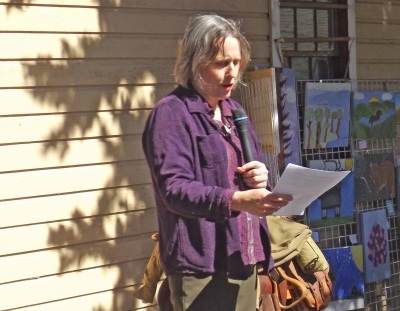 “When people learn that the army was building infrastructure for horses and mules in WWII they are startled.  We know that the cavalry and horse drawn munitions and pack mules were used in the Civil War and WWI but when did this actually end?  Where was the last stand of the U.S. Warhorse?  The answer is right here the buildings of the present day Marina Equestrian Center lining 5th Avenue and in front of you are the Fort Ord Station Veterinary Hospital a WWII Army Hospital for horses and mules.   It was completed in January 1941.  In the 1930’s there was a heated debate whether  the U.S. Army should continue with horse or convert entirely to motor vehicles – horses have advantages.  Number one they are the ultimate all terrain vehicle and we saw them being used in Afghanistan in 2001. The Marines at Bridgeport are using horses to this day.  The army built 12 of these station veterinary hospitals in the mobilization era 1940 – 1941, Fort Ord is the only one left and it is complete, all six buildings.” Margaret Davis 3rd Annual Warhorse Day 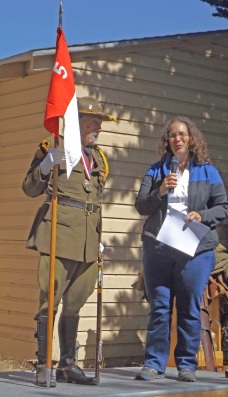 Our morning at the 3rd Annual Warhorse Day was filled with patriotic, family friendly, educational activities.  My husband and I had one hour before our “Loop de Fort Ord” bike ride sponsored by Monterey Off Road Cycling Association which was scheduled to leave promptly at 11:15AM.
We had the opportunity to meet Sgt. Allan MacDonald, one of the last surviving horse cavalrymen, at 89 years young who still wears his uniform sharply as living history lesson lest we ever forget this era.

Sgt. MacDonald’s chest is covered with medals, including two Purple Hearts (Admiralty Islands and Korea) and a Bronze Star for action in the Admiralty Islands.
Here is our quick run through of the museum and the surrounding exhibits.
Before we leave we wonder if lunch might be in order, that chow line looks and smells mighty inviting, thank you Marina Volunteer Firefighters Association  – but burgers, hot dogs, and army beans – better wait until after our 11 mile ride.
___
Credits