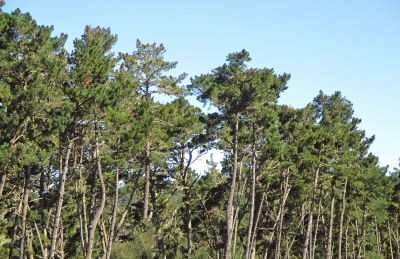 “In the beginning, there was the forest on the seaward-tilting slope of the land.  The thick straight trunks of the mighty Monterey Pines held billowy green canopies high against the sky.” (1)

To this day all who make the journey from Monterey over the hill to Carmel witness this majestic forest stand of Monterey Pines.

In 1888, Monterey native brothers Santiago and Belisario Duckworth acquired the rights to develop 324 acres of the Las Manzanitas Rancho from Honore Escolle.  The brothers filed the first official map of what was then called Carmel City with the Monterey County Recorder’s office in Salinas the same year.  Carmel City was laid out in a grid pattern with one hundred thirteen blocks which would contain both the residential and business district of town.

“In 1901, Santiago Duckworth came to Frank Devendorf … he wanted to exchange all of his unsold Carmel City lots for whatever Devendorf had to offer in return.  Devendorf proposed to trade him some land in Stockton for the Carmel lots and the two men agreed.” (2)  Devendorf would go on to plant Monterey Pine trees down the center of what could come to be called Ocean Avenue.

Today we reap the benefits of Devendorf and all those who continued in his manner to plant trees in Carmel-by-the-Sea, now known as “a village in a forest by the sea.”

Friends of Carmel Forest, founded in 1989, a citizens group committed to the enhancement and perpetuation of Carmel’s forest environment is one such organization.  Besides the spectacular surroundings, another wonderful reason to live in Carmel is the unlimited option for life-long-learning experiences.

On July 11th, 2014 Dr. Matt Ritter botany professor at Cal Poly lead our group on a 3 hour tour of Carmel’s trees.  This was his third year leading a walk and lecture that highlighted thirty plus varieties of trees. We viewed and learned how to identify trees in a 9 square block area bordered by Dolores to the east, 5th Avenue to the north, Monte Verde to the west and 7th Avenue to the south. (I have included a map at the end of this post for use as a self-guided tour).
With the information Dr. Ritter provides along with his very user friendly book A California’s Guide to the Trees Among Us anyone, no really anyone can learn to identify the trees among us.
“I have always been drawn to trees and believe that I am not alone in this sentiment.  Growing up among the remnant stands of large valley oaks in a small interior valley of California’s North Coast Range…I knew there was something inspiring about trees…Those who live in California need not travel to exotic places to see an eclectic mix of trees from all corners of the earth; one only need stroll down a local street and look up.” (3)
That is exactly what we did, beginning at First Murphy Park next to the First Murphy House home to Carmel Heritage Society.

One of the rarest trees in the world, the Monterey Cypress occurs naturally in only three areas, Pebble Beach, Point Lobos and Carmel-by-the-Sea.  The large specimen in the center of the park is suffering possibly from the drought.

We have another opportunity on our hike to view a healthier example. In front of Cypress Inn are three trees, (r to l)  a sickly Redwood, Juniper and Monterey Cypress with thick bundles of fruit clustered as globular cones weighting down bows of leaves.

Our next tree, the Italian Stone Pine is distinguished by its characteristic flat top which can be seen below juxtaposed against the Monterey Pine’s in the distance.

The leaf of the Stone Pine contains two needles per bundle.

The cone does not produce the usual winged seed; rather inside this seed is the very delicious Pine Nut.

Though the leaves appear to be showing their fall colors, they should not be in early July.  The two Big Leaf Maple’s in First Murphy Park are probably also suffering from the drought.  The few leaves that hang on their limbs are

chlorotic (not producing sufficient
chloropyll to stay green) and have a fungus.

Just outside the park we encounter our first eucalyptus, the Narrow-Leaf Peppermint. The name “Eucalyptus” comes from the Greek meaning well covered, referring to the dome-shaped bud cap that falls off as the flowers open.

At the intersection of Ocean Avenue and Monte Verde are a number of the native Monterey Pine. The leaves contain three needles per bundle and the cones appear slightly lopsided.

The Monterey Pine is native to the Monterey Peninsula and the coast of Santa Cruz and Cambria.  These that line Ocean Avenue in front of the Normandy Inn and Pine Inn were planted in the early 1900’s.

In front of City Hall on Monte Verde between Ocean and 7th Avenue are very nice specimens of our California state tree, the Coast Redwood.  The Coastal Redwood is the tallest tree in the world with the tallest at 387 feet located in Del Norte County California.

Our Coastal Redwood is not quite that tall, Dr. Ritter believes the one below may be around 80 to 90 feet. The circumference was measured a few years ago by Friends of Camel Forest at 12 feet.

One of our Coast Redwoods has a large burl, which is where the grain of the tree has grown in a deformed manner.  Burls are popular with furniture makers and wood sculptors, with some trees being harvested for their burl.  Many ancient redwoods in the National Parks of the Western United States have been poached for their burls. 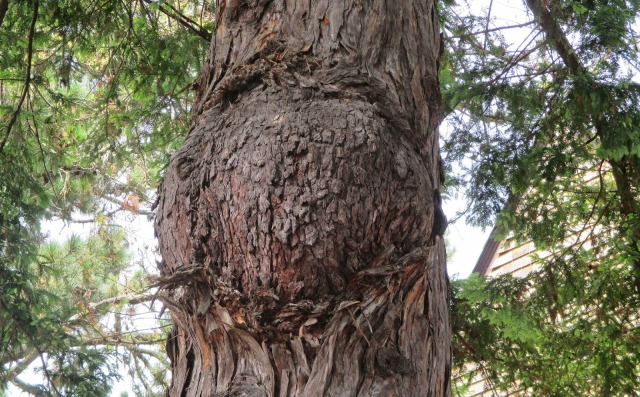 Across from the L’Auberge Carmel  we find our next two trees.  The first is the Tulip Tree with it’s distinctively truncated (squared-off) leaves with four points.

Dr. Ritter explains that the Tulip Tree does not do well in coastal climates.  This one has an infection of mealybugs and aphids.  Which led to Dr. Ritter’s interesting story about the relationship between ants and aphids, or what is called herding or farming aphids.

Once upon a time near a Tulip Tree ants became known as protectors of aphid larvae.  The aphids were so thankful that they vowed to repay the ant by supplying them honeydew. Or something like that.

Dr. Ritter explains it like this, the aphid uses it’s mouthpiece to drain sugar out of the plant. When the aphid becomes so full the sugar is excreted in the form of honeydew. The ant then drinks the droplets the aphid excretes. When the sugar runs out in one area of the plant, the ants herd the aphids to another area and start the process all over again. I wasn’t quite sure I believed it untill I found this BBC video. Nature is amazing.

Native to China, the Tree of Heaven is usually found in vacant or abandon lots and is even nicknamed “ghetto palm.”  But here in Carmel we find two right in the middle of town.

The leaves of the Tree of Heaven are compound with palmate leaves.  Meaning they have leaflets arranged along the edges of a central stem. 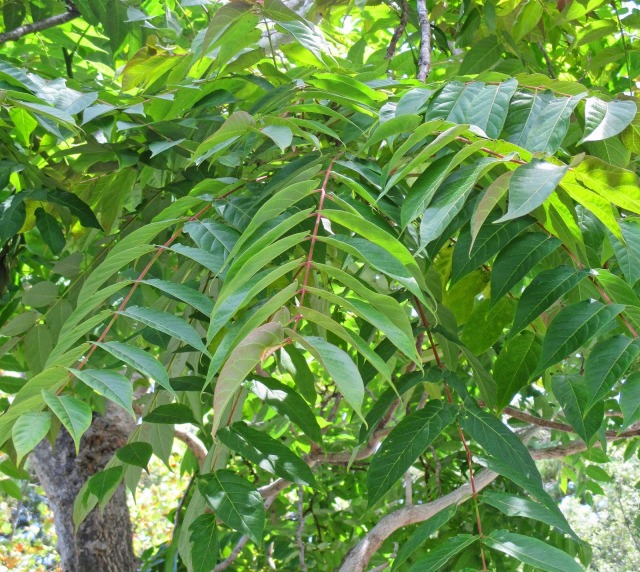 In the planter outside the Mandeville Lee Hazen Group  Dr. Ritter introduces us to the Manzanita (left) and Japanese Maple (right).

The Manzanita is an evergreen bush or small tree that is native to California with reddish brown bark.

Manzanita means “little apple” in Spanish and when looking at the fruit I suppose they look like little apples.

The Japanese maple is native to Asia; this species has a spectacular showy purple/red color. 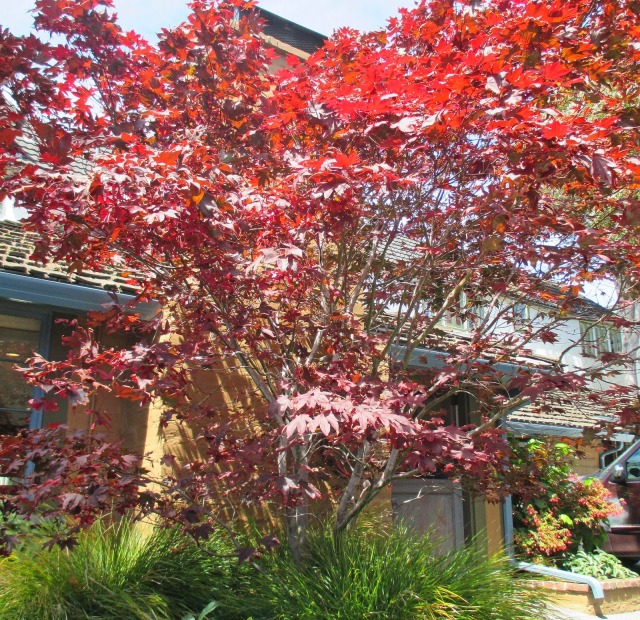 I used to think that the winged structures below the leaves were just immature leaves.

They are actually the fruit, which are a pair of winged segments that each contains a seed.  The seeds which are spread by the wind are perfectly weighted in each segment, so that when they detached from the tree they spin like a helicopter.

Around the corner from the Japanese maple (still trying to hog the camera time) is the Blackwood Acacia.

Okay full disclosure time, I am not the biggest fan of the acacia.  And after reading in the Friends of Carmel Forest Newsletter that in the last eight years, the acacia presence has increased in the Village 40% as compared to the Oak at 14% or the Pine at -15% maybe Carmel-by-the-Sea should not be such a big fan either.  But anyway this specimen is lovely and apparently has no problem surviving, thriving or multiplying in our climate.

The seeds, Dr. Ritter explains are distributed by the “bird dispersal mechanism.” The black seed on the inside of the pod is attached with an embilicle cord feeding the seed. As it develops the red feniculas wrap around the seed twice. The birds are attracted to the red and pick off, eat, and digest the feniculas.  The excrement from the bird of this seed becomes the new tree.

Our next tree is native to the Mediterranean.  The Olive tree was most likely the first non-native tree introduced to California by the Franciscans at Mission San Diego.

It does well here. The trunk of the Olive tree appears older than it is.  Dr. Ritter estimates that this tree is only about 30 years old.  To me this tree is reminiscent of the back side of Michelangelo’s David.

“Magnolias are an ancient and primitive group of flowering plants that evolved at a time when Earth was covered primarily with ferns and conifers.  The iconic southern magnolia is widely planted throughout California and is the most widely grown ornamental tree on Earth.

It can be recognized by the contrasting sides on its evergreen, stiff, leathery leaves: glossy, dark green above and gray to rust-colored and felted below.

Its spectacular, fruit-scented, creamy white flowers are borne individually on the deep-green canopy like huge water lilies. They are California’s largest cultivated tree flowers, some reaching a foot in diameter.  These flowers evolved prior to butterflies and bees and were originally pollinated by beetles…” (4)

The American Linden is native to Eastern North America. Here in Carmel we have two.

The flowers are attached to a bract (modified leaf) and are both male and female.  Once the cluster of flowers are pollinated they turn into a cluster of small fruit and fall from the tree.  When the weight of the fruit is just right, the bract acts like a helicopter dispersing the fruit away from the parent tree in the wind. 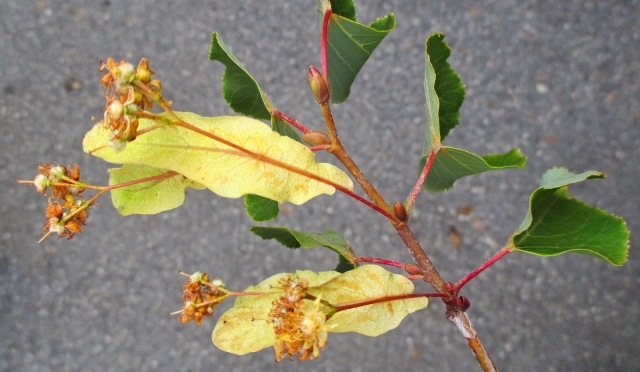 In Piccadilly Park Dr. Ritter points out the Washington Hawthorn, Griselinia and Ginkgo.  The Ginkgo is an ancient organism having been around before flowering plants.

Trees are male and female.  Though most Ginkgo’s planted are male due to the unpleasant odor of the female fruit.

There are two Deodar Cedar’s across from the Village Corner.

Note the upright female cones
that sit atop the branches.

In front of the Carmel Art Association we view a healthy stand of Coastal Live Oak. 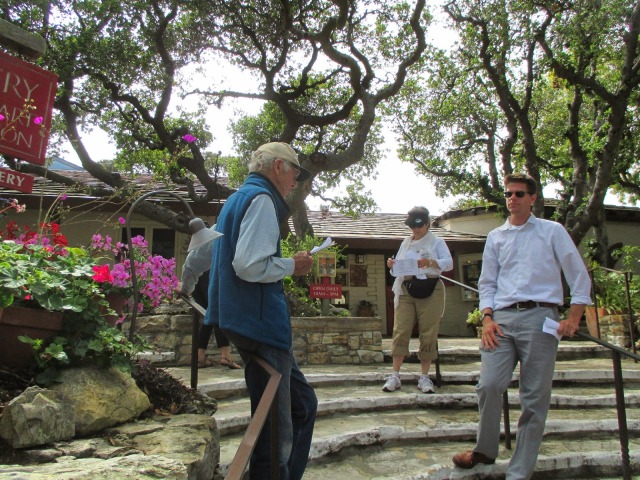 Native to our area the missionaries saw this incredible tree flourishing throughout the area and believed it to indicate the ground was fertile. They were right.

Our tour ends back where we started near First Murphy House on Lincoln with a very large Bluegum (not the largest in town that would be found on the NW corner of Ocean and San Antonio).

The Bluegum is the second most planted tree in the world. Native to Hobart Tazmania it was introduced to California in the 1850’s by a ship captain who sailed between San Francisco and Tazmania.  He liked the tree, and planted a large orchard of them on his ranch in Cordilia, California.

Thank you Dr. Ritter,
we look forward to next year.

Credits
All photography by L. A. Momboisse http://www.carmelbytheseaca.blogspot.com unless noted below: