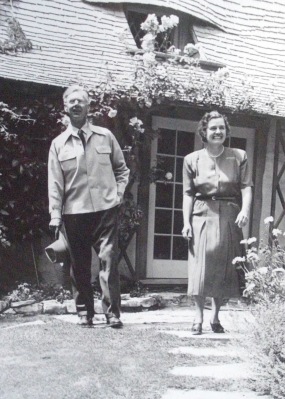 Hugh Comstock and his wife Mayotta built
“Hugh W. Comstock Residence”
as their private residence and office in 1925. 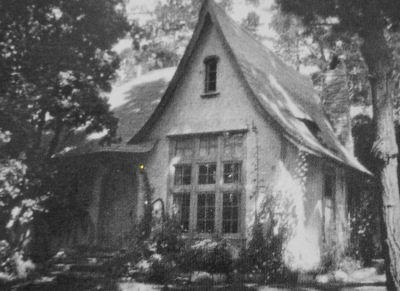 The picture above shows the original
structure shortly after being built
for $1,000. 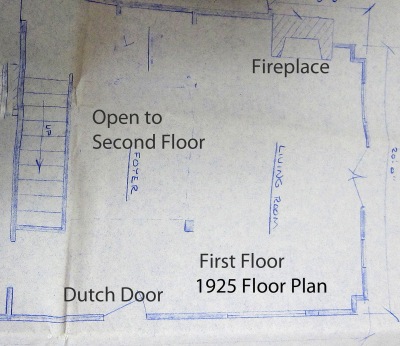 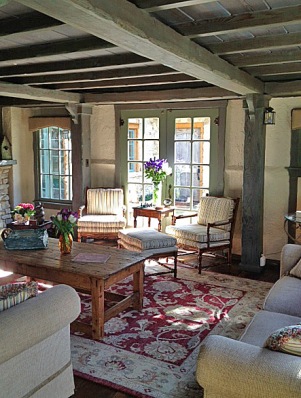 *
with a signature Comstock Carmel
stone fireplace on the first floor, 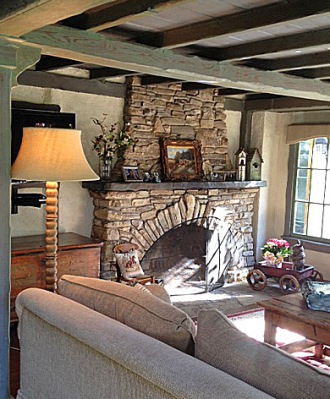 *
and a petite bedroom above the living area. 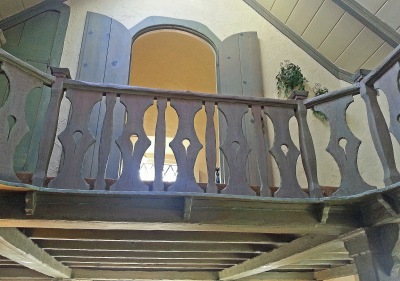 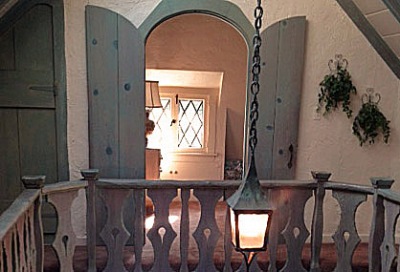 *
In this tiny cottage, Hugh built the ceiling
low over the first floor living area.
The open beam ceiling exists today
as it did over 80 years ago –

intersecting the bottom of the top tier
of the south facing three-tier
mullioned window at 90 degrees.
(seen from outside in this picture from 1924) 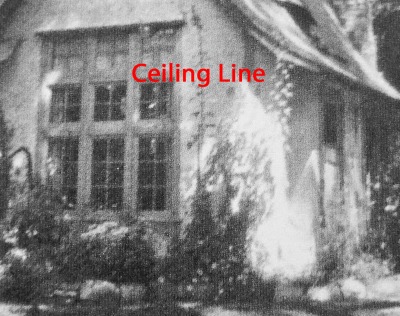 Or this current picture 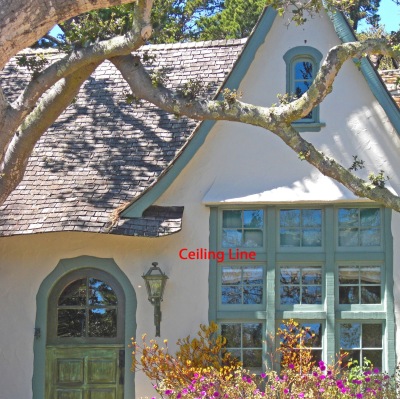 The bedroom over the living area is reached by
the staircase in the foyer, 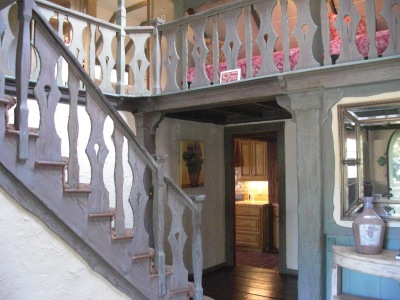 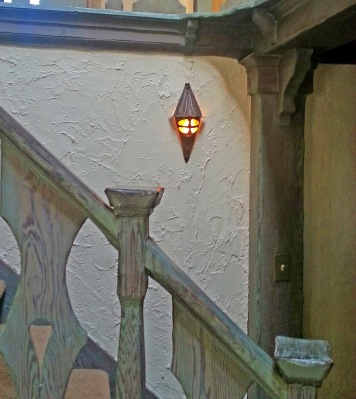 **
This light fixture is thought
to be an original to the home. 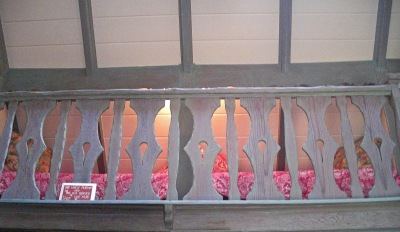 Comstock, also famous for his use of space,
incorporates two twin beds and 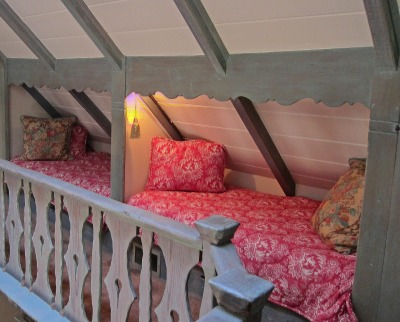 a door for storage in the slant of the steep roof line. 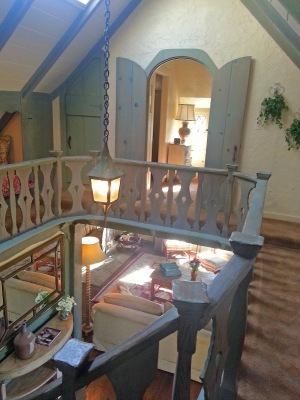 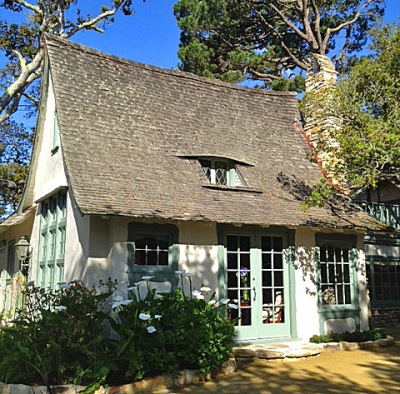 *
and the south facing narrow arched
three-light casement window.
Features Comstock would incorporate in his
future cottages, The Studio and Our House. 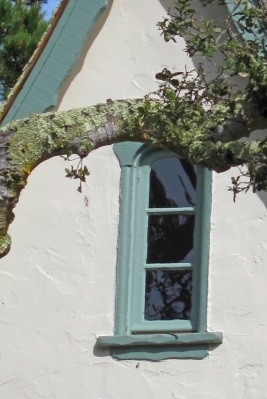 In 1940 Hugh Comstock added a
two story addition to the west side
of the cottage. 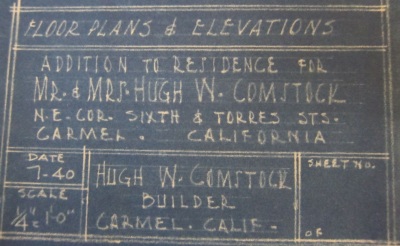 On the first floor a kitchen, dining room
and lavatory were added. 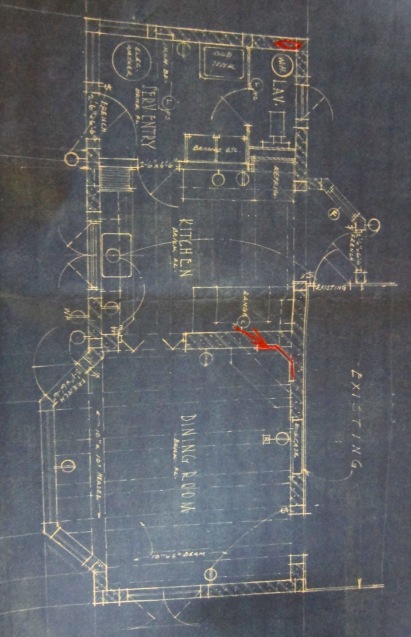 In this new addition Hugh incorporated
his new Post-Adobe
construction on the first floor.
The original brick floor
and fireplace still exist 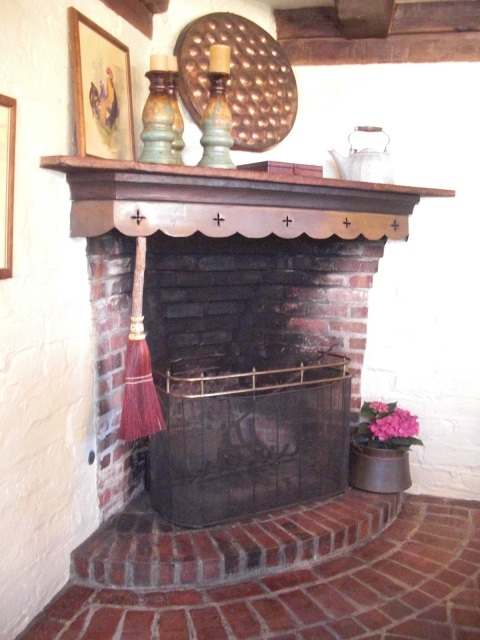 as well as the Post-Adobe brick walls.

The picture below shows the south elevation of
the home after this addition. 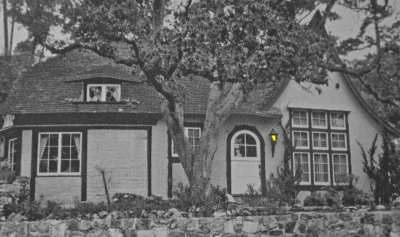 Upstairs Hugh added a master bedroom
with adjoining bathroom
and east facing deck,
and a sewing room
with west facing deck for Mayotta. 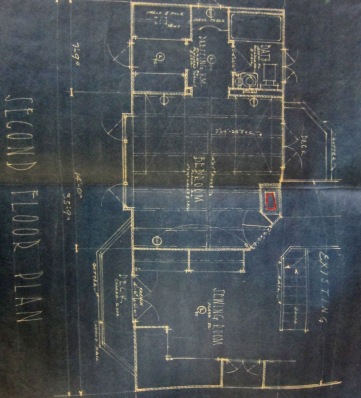 The plans above were drawn by Hugh Comstock.
The balcony outside Mayotta’s sewing room
is shown on the plans
to the left and would be
the west facing elevation
toward the sea. 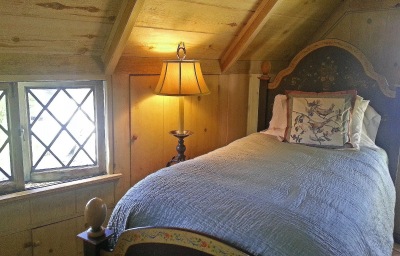 Wooden French doors leading to a balcony
with yet another signature
Comstock hand hewn low railing,
this time of double pierced
flat wood balusters similar in style to the
interior staircase and balcony. 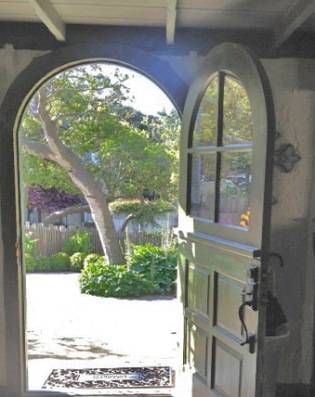 Hugh Comstock’s architectural signature
is visible throughout this historical cottage
located in the Historical Hill District of
Carmel-By-The-Sea.

We have the longtime current owners to thank,
as they have lovingly maintained
and restored this charming home
both inside and out.
___
Photo Credits
Black and White photo of Hugh and Mayotta outside “Obers” donated by Harrison Comstock to the Henry Meade Williams Local History Department, Harrison Memorial Library.

One thought on “Carmel by the Sea – Hugh Comstock’s Architectural Signature – Inside "Hugh W. Comstock Residence formerly known as Obers"”